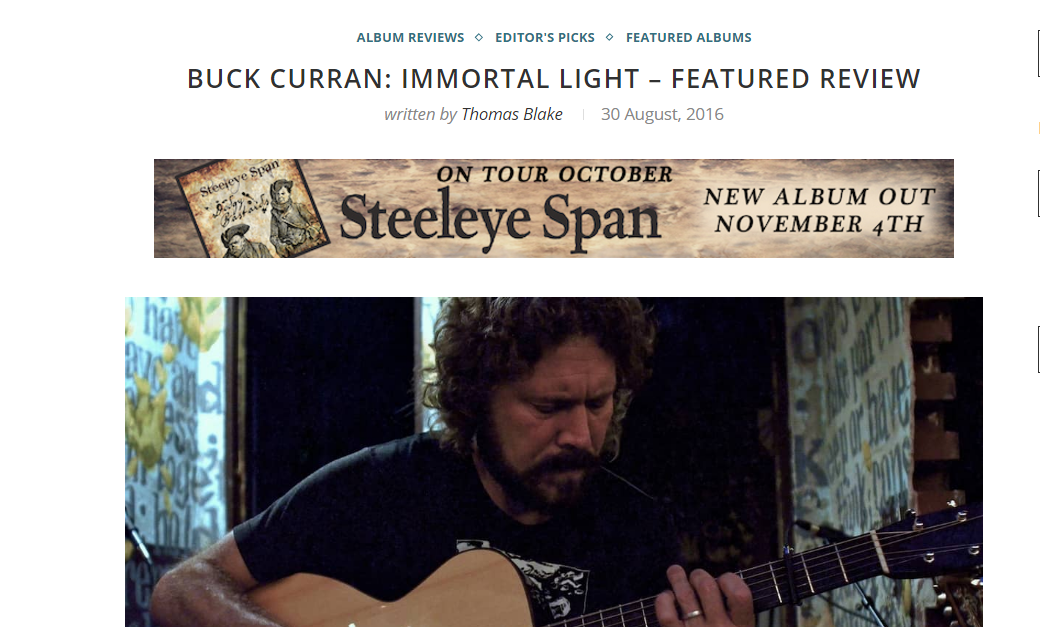 “With Immortal Light Curran has successfully tapped into that natural beauty and created a slice of alt-folk that is as engrossing as anything you’re likely to hear.”

Buck Curran has been a leading light in the psych-folk scene for so long now that it might come as a surprise to learn that Immortal Light is his first solo album. As one-half of Arborea (alongside Shanti Deschaine) he has carved out a path somewhere between the witchy groves of the wyrd folk movement and the more studiedly avant-garde realms of improvisation and composition, and in doing so has created five critically acclaimed and highly accomplished records.

Immortal Light isn’t a complete departure from the tried and trusted methods – indeed, Deschaine features on three of the eight tracks – but it does allow Curran to delve a little further than usual into the wide range of possibilities offered by his instrument of choice, the guitar. Wayfaring Summer (Reprise), for example, is a brief but exploratory instrumental that showcases Curran’s dextrous fingerpicking style, as well as his clear affinity with pickers like Robbie Basho* and John Fahey. Like those two greats he has an interest in unconventional tunings, and throughout the album, he looks to the east for inspiration, often incorporating ideas from Indian music, most notably raga.

But he is not averse to the occasional progressive flourish, or indeed an accessibility that can only be described as poppy. The folk-rock New Moontide, with Deschaine on backing vocals, has a simple verse-chorus-verse structure and a memorable vocal refrain, while Sea Of Polaris‘s layered electric and acoustic guitars bring to mind Mike Oldfield, albeit in a more condensed form.

Seven Gardens To Your Shore is one of a number of songs here that shows a lyrical and musical preoccupation with water and its movement, and it comes as no surprise to learn that the whole album was inspired by Curran’s relationship with the river near his New England home. River Unto Sea is one of the most quietly impressive tracks here. A meditative, serpentine instrumental that swells imperceptibly, it is a prime example of a musician in tune with his surroundings. It is followed by a cover of Bad Moon Rising – a move which could, in less subtle hands, seem incongruous, but whose apocalyptic themes are handled with understated eeriness.

Curran saves perhaps the most challenging moments for last. Andromeda takes the form of an extended drone with a subtly shifting character, while the thirteen-minute title track begins with a drone of its own before Deschaine’s lead vocal creates a layered, immersive soundscape, tempered by Curran’s Indian-sounding guitar. The ingredients – LaMonte Young-esque drone, female vocals, harmonium – point to a sound that might resemble John Cale’s production work with Nico. But whereas an album like The Marble Index derived much of its power from its violence, from the fact that Nico was constantly working against musicality, Curran’s approach is much more organic, more willing to admit melody, to the extent that even the lyrics touch on healing and wholeness.

And maybe that sums up the importance of Curran’s work. It takes risks, it is not afraid to be experimental, but at the same time, it never denies the primacy of melody or relinquishes the idea that natural beauty – the beauty of the seas or of the cosmos – can find its way into music. With Immortal Light Curran has successfully tapped into that natural beauty and created a slice of alt-folk that is as engrossing as anything you’re likely to hear.

Order it now via Bandcamp: obsoleterecordings.bandcamp.com/album/immortal-light